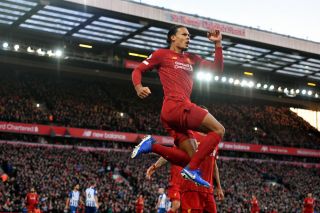 A Virgil Van Dijk double sent Liverpool 11 points clear in the Premier League despite a nervy finish against Brighton after Alisson Becker was sent off.

Two first-half headers from Van Dijk put the leaders on course for a comfortable victory at Anfield but a rash decision from Alisson and a Lewis Dunk reply left them hanging on for a 2-1 success.

Alisson was dismissed for handling outside his area and his replacement Adrian was caught out by the quick-thinking Dunk.

😨 Albion so close to what would have been a deserved point at the home of the European champions.— Brighton & Hove Albion ⚽️ (@OfficialBHAFC) November 30, 2019

Yet despite a nail-biting conclusion – with Mohamed Salah and Roberto Firmino having already been substituted – the hosts held on to ensure they took full advantage of champions Manchester City’s draw at Newcastle earlier in the day.

The tension of the closing moments was in contrast to most of the game, which Liverpool controlled with little alarm.

They did start slowly with an Andy Robertson shot well over the bar and a Salah effort into the side-netting all they produced in the opening 15 minutes.

But Brighton offered little and once the hosts upped the tempo they could not contain them.

They broke through after 18 minutes as Trent Alexander-Arnold clipped in a superb free-kick for Van Dijk to head home. Brighton keeper Mat Ryan paid for a moment’s hesitancy as the Dutchman’s header looped over him and into the net.

Ryan then had a busy spell as he turned a Firmino shot behind and then denied Sadio Mane moments later.

Van Dijk had an awkward moment when he mishit a clearance across his own goal but he was at his inspirational best again when he doubled the lead after 24 minutes.

The assist again came from Alexander-Arnold, this time from a corner, swung temptingly into the box and met unerringly by Van Dijk.

Liverpool then eased off the gas and Brighton briefly threatened as Davy Propper forced a save from Alisson from distance but the first half ended with Firmino testing Ryan again.

The Seagulls had an opportunity early in the second half when Dunk glanced a header across goal from a corner.

Alex Oxlade-Chamberlain showed good footwork in the area before Ryan turned his shot around the post and Alexander-Arnold had another effort deflected over.

Liverpool boss Jurgen Klopp decided with 21 minutes remaining to give a rest to Salah, who has been troubled by an ankle injury in recent weeks, and replace him with Adam Lallana.

The Egyptian did not look pleased with the decision as he brushed past Klopp on his way to the bench. He was soon followed by Firmino as Liverpool made another change.

Those substitutions may have been made with the best intentions, but they left the Reds looking light in attack after Alisson’s moment of madness changed the complexion of the game late on.

Alisson came out of his area as Leandro Trossard chased a long ball downfield and was adjudged to have handled as he touched it away from the Belgian.

Liverpool were still reorganising when Dunk caught them unawares with a clever low free-kick into the bottom corner.

That left them needing to play out the final 10 minutes with 10 men but, despite Brighton pushing them back, they held on.