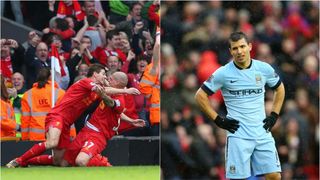 City have won at Stamford Bridge and Old Trafford already this season but their record away to Liverpool has been dismal for some time now.

Jurgen Klopp is expected to hand a league debut to Virgil van Dijk after the centre-back made himself an instant hero with the winner in last week's FA Cup Merseyside derby against Everton.

Liverpool are on a 13-match unbeaten run at home and City must be on their mettle to get the better of a tussle that has rarely been kind to them – as these Opta numbers demonstrate.

City last won at Anfield in May 2003, drawing four and losing 10 of the subsequent 14 meetings in Liverpool, including defeats on each of their last four trips.

That 2-1 victory, thanks to a late Nicolas Anelka brace, stands as the Blues' only triumph in 20 Premier League attempts at Anfield, where they have endured 14 losses and claimed five draws.

The overall Premier League head-to-head stands at 18-8 to Liverpool, with 15 draws.

City won the reverse fixture 5-0 at the Etihad Stadium in September and another triumph on Sunday would chalk up their first consecutive Premier League victories against Liverpool, whose best run in the modern history of the fixture came with four wins in a row between March 1, 2015 and December 31, 2016.

The five-star showing earlier this season is City's biggest Premier League win over Liverpool, who beat them 6-0 on Merseyside in October 1995. City had already lost 4-0 at Anfield earlier that week in the League Cup

You have to go back to 1936-37 for the only time City have completed a double over Liverpool. They finished that season as champions.

Liverpool great Ian Rush scored eight times in as many Premier League games against City for the best return in the fixture.

City's all-time record goalscorer Sergio Aguero is next on this chart with six in 11 although, tellingly, all of the Argentina international's goals against the Reds have come at the Etihad Stadium.

Michael Owen hit five in just four games for Liverpool versus City, including a hat-trick in September 2002 at Maine Road.

Steven Gerrard and the recently departed Philippe Coutinho are among a cluster of players with four Premier League goals in the game.

Most appearances and a foot in both camps

Long-serving captain and crowd hero Gerrard played 23 Premier League games against City in his Liverpool career, with Jamie Carragher next up on 18 appearances.

Joe Hart's 15 games against the Reds are the most of any City player in this fixture, the same as Martin Skrtel and one shy of fellow goalkeeper Pepe Reina.

James Milner featured 14 times for City against the Reds but is in contention to line-up on the opposite side this weekend.

Milner is one of 14 players to have represented both clubs in England's top flight. Anelka's City strike partner on his memorable Anfield outing was Robbie Fowler.

Raheem Sterling is the latest attacking talent to have both clubs on his CV, joining the likes of Craig Bellamy, Nigel Clough, Steve McManaman and Mark Kennedy.

Albert Riera, Daniel Sturridge, Mario Balotelli and Kolo Toure were all City players before turning out at Anfield, while Dietmar Hamann and David James were Liverpool men who later donned City colours.

As Jose Mourinho and Antonio Conte's verbal grappling shows little sign of being lifted out of the gutter, Klopp and Guardiola provide a contrasting rivalry of affable eccentricity, but this does not disguise a fierce will to win on the part of both men.

No opposition coach has beaten Guardiola more frequently in competitive matches than Klopp, who is level with Mourinho on four victories.

Former Bayern Munich boss Guardiola still edges the head-to-head with his ex-Borussia Dortmund counterpart, winning five, although one of their two draws ended with BVB beating Bayern on penalties in the 2015 semi-finals of the DFB-Pokal.

Both adapted impressively as expected after swapping the Bundesliga for the Premier League, although Guardiola is only four wins behind Klopp overall in England's top flight despite overseeing 30 fewer matches.