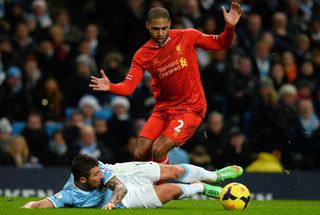 The full-back has made 17 appearances in the Premier League this season, including last weekend's 2-2 draw with Aston Villa, but he has struggled with an ankle injury for large parts of the season.

Johnson was first sidelined in September and spent six weeks recovering, however Rodgers was unable to give a timescale for when he expects the England international to return this time around.

"Glen has played a lot of the season having been injured and really put himself out for the team, but unfortunately he's struggled a lot with a number of injuries," Rodgers said.

"He's had a real bad ankle for a period of time, and just one or two other issues that haven't allowed him to be 100 per cent.

"I think everyone has seen over many years the speed, fluency and how good he's been, but for part of this season he's been restricted and that's obviously been difficult for him.

"But he's put himself out for the team to train and to play, and I just think it's now at that point where we need to get him right.

"There's no timeline on it. We just need to assess it and we'll take it from there."

Rodgers' injury woes were further compounded on Thursday with midfielder Lucas Leiva also set for "a few months" out with a knee injury.

However, the blow of losing Johnson has been lightened with the news that Jon Flanagan has returned to training after a recent hamstring problem.