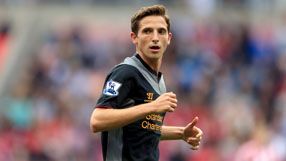 Allen's Wales side suffered a 2-0 defeat to Croatia on Tuesday evening, and the Liverpool midfielder has praised the performance of opposite number Luka Modric.

Speaking to The Telegraph, he said: "[Modric] showed me that I've probably got quite a lot of work to do in order to get anywhere near his level.

"He is some player. You want to test yourself against those kind of players and for me personally it was disappointing because I felt he controlled the game for them and he looked comfortable throughout."

Having pitted himself against the Real Madrid man, Allen was left in awe of a player he no doubt hopes to emulate at Liverpool in the future.

"He’s a top, top player, he plays for one of the biggest clubs in the world and in his position he is one of the very best."

The 22-year-old midfielder joined the red half of Merseyside in the summer, completing a £15 million move from former side Swansea City. Brendan Rogers' side have endured a poor start to the season, picking up just a single victory in their opening seven league games, but Allen was adamant that fortunes would soon improve.

He said: "I’ve got no doubts that our results will turn around. The table doesn’t reflect some of the performances and the things that have happened to Liverpool this season. You can see the style of play is coming into its own."