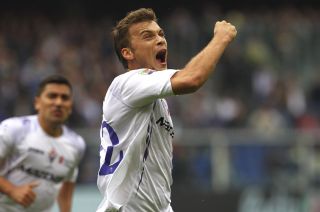 Rudi Garcia's men sit top of the table with a 100 per cent record after seven games, having conceded just one goal.

And the former Fiorentina forward admits to having been taken aback by how well they have started, although he has also urged caution.

"I am always an optimistic type, but I must admit I didn’t expect us to do so well" he told Il Tempo.

"So far, Roma have been fantastic, but we must continue taking it one game at a time, just like Rudi Garcia asks. It’s the only way we can win something."

Roma face second-placed Napoli at the Stadio Olimpico on Friday, although Ljajic does not count Rafael Benitez's side as the major title threat.

"I said before I arrived from Fiorentina that only Juventus are stronger than this Roma side," he continued.

"Another four or five, including us, can fight for second place. Our minimum objective is to qualify for Europe, then at the end of the day we'll see where we are."