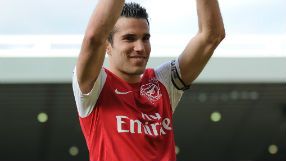 Van Persie’s contract is set to expire in 12 months and reports suggest Manchester City and Barcelona are prepared to move for the striker during the transfer window.

Ljungberg believes a couple of world class players will convince the Dutchman to stay in North London rather than leave.

And the former Sweden international feels it is imperative they keep hold of Van Persie if they are to compete for silverware.

"I think there's nothing to advise Robin, I think it's more that you have to advise Arsenal," Ljungberg told Goal.com.

"When Robin came to Arsenal we were a good team and we were winning trophies.

"I think that's what he wants to do, and I think that Arsenal maybe have to open their wallet a little bit and buy maybe two or three top, top players… not just players for the squad.

"I think that will win Robin over on whether he will stay or not, and as a fan I hope that's what he is going to do because I want to see Arsenal lift trophies again."

The 35-year-old believes building their new stadium prevented the club from spending big in the transfer market, but feels the North London side are now in a healthy financial position to bring new players in.

"I know that when they built the new stadium, that took a toll on their economy and they couldn't show their muscle so much in the transfer market, so yes I think they have to [spend more] now," he added.

"It's about competition, and a big club in a healthy situation, as they are, need to not lose players and get players in.

"That's what we did in the past when we were at Highbury and I hope we can do it again."