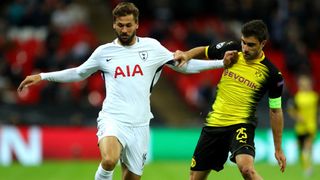 Fernando Llorente revealed a last-minute telephone call from Mauricio Pochettino convinced him to snub Premier League champions Chelsea in favour of a move to Tottenham.

The former Spain international made the switch from Swansea City for a reported £12million on deadline day and will provide competition for star striker Harry Kane.

Llorente, who scored 15 league goals last season, had been widely expected to reunite with his former Juventus coach Antonio Conte at Chelsea.

But the 32-year-old said his decision was influenced by a late pitch from Spurs boss Pochettino.

"At the very last minute, Pochettino called me and convinced me [to join Tottenham]," Llorente told The Daily Mail.

"The truth is that Chelsea have been after me for a long time but at the end you know how this works.

"I am very happy because at the end everything came out perfect. Tottenham are an amazing club with a wonderful project and I think I fit in very well.

"It is clear that Pochettino played a very important role in the decision."

Llorente debuted for his new club in Wednesday's 3-1 defeat of Borussia Dortmund in the Champions League, replacing Kane off the bench at Wembley.

The appearance marked the start of another chapter in the forward's relationship with Pochettino, which began on his LaLiga bow in 2005.

"I made my first-team debut [for Athletic Bilbao] against him at San Mames. He was at the end of his playing career and I was at the beginning of mine," Llorente said.

"Then he [became] the Espanyol manager and I faced him several more times. Now I play under him at Tottenham and I really want to give my best."