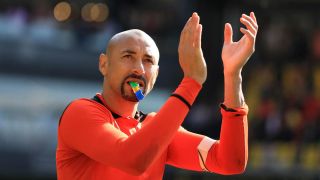 Heurelho Gomes believes outgoing Watford boss Walter Mazzarri struggled to communicate with his squad due to his command of the English language.

Watford announced Mazzarri would step aside at the end of the season this week and his injury-hit squad was thrashed 5-0 by Manchester City on the final day of the Premier League campaign.

Four of City's goals arrived before half-time, with Sergio Aguero bagging a brace, and sympathy for the former Napoli and Inter boss was in short supply in the stands.

A section of the home support chanted for Mazzarri to be sent off when he was admonished by referee Jon Moss during the second half and veteran goalkeeper Gomes – arguably Watford's best performer despite the scoreline – picked up a familiar criticism of the 55-year-old Italian during his season in England.

"It is important to speak English if you are a manager," Gomes told BBC Sport. "They cannot pass on instructions to the players but he tried his best and we thank him for it.

"The club had to make a decision, and they did. The language didn't help him. We apologise for some of our mistakes, we can't just blame the manager."

Speaking at a post-match news conference, Mazzarri defended his performance as the Pozzo family's disposable attitude towards the men they entrust to coach their sides rumbles on.

"I think with this difficult situation a less experienced manager would have done worse. We were safe mathematically when there were still six games left."