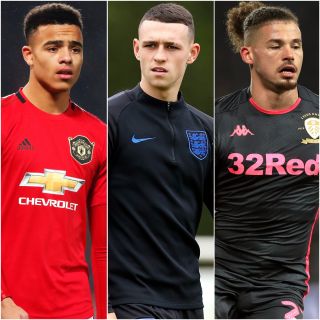 After the Covid-19 pandemic led to March’s friendlies being scrapped and the postponement of Euro 2020, the Three Lions are preparing for their first fixtures since last November’s European Championship qualifier in Kosovo.

It is an understatement to say that a lot has changed since then and Southgate has named a 24-strong group for September’s Nations League double-header against Iceland and Denmark.

Manchester United’s 18-year-old forward Greenwood joins Manchester City playmaker Foden in stepping up to the senior squad, while Phillips is in line to become the first Leeds player to play for England since 2004.

Gareth Southgate on @Kalvinphillips: "I spoke to him this morning, which was a nice reminder of what it means for somebody to be in their first England squad.— England (@England) August 25, 2020

“I feel like the last eight months I’ve had so many difficult conversations in various departments and areas of life generally,” Southgate said.

“To call a player in the morning and let him know that his first England call-up was going to happen today was a lovely moment and a reminder of how much it means to players and their families to be involved with England and selected by England.

“Kalvin is a player who we’ve been very impressed with in that particular role at Leeds. He’s obviously extremely well coached, they’re an impressive team to watch.

“It is a step up for him because he has got to adjust to life in the Premier League but it’s a position we need some competition for places in and we’re interested to look at him at this early stage of the season.

“With Phil and Mason, we know them a bit more. They’ve both been very impressive with our junior teams.

“I think both of them were excellent in the post-lockdown period for their clubs. Both played big matches, important matches at big clubs, and had a big impact.

“They have the potential to be internationals for time to come. As always, that’s up to them, their mentality and the way they play but we have belief in them and we’re really looking forward to working with them.”

While the trio have earned the right to be called up, Southgate has preferred to go without a specialist left-back as injuries underlined the dearth of options.

An honour to be called up! Can’t wait to pull that @England shirt on!! pic.twitter.com/PFtwdemBZS— Phil Foden (@PhilFoden) August 25, 2020

“We will need to be adaptable for sure,” he explained. “The injury to Ben Chilwell, in particular, (is an issue). Luke Shaw is also injured and Danny Rose we felt at this moment in time his performances need to be a little bit better.

“We have got options of players who can play on the other side, players that have played in that position before. It’s not ideal.

“We could look tactically at something different if needed but it’s a position that is definitely up for grabs.”

That position is just one of a variety of reasons why this squad selection has been the “most complicated” of his tenure, with the timing of the new season and coronavirus procedures meaning this is sure to be a difficult camp.

A proud moment for me and my family to be called up for @Englandpic.twitter.com/AnIvaBPxyf— Mason Greenwood (@masongreenwood) August 25, 2020

There had been concerns about the availability of Raheem Sterling after attending the party of former Jamaican sprinter Usain Bolt, who is now self-isolating due to coronavirus fears.

The Manchester City forward has been included in the squad for September’s fixtures having reportedly tested negative for Covid-19, with many more tests to follow for all selected.

“I think we’ve got seven players who because of the finishing point of their season are currently on holiday or certainly not training with their club, so they’re all outside of the more regular testing regime,” Southgate said.

“I think it’s clear from what I’ve read that there have been positive tests within the Premier League, with clubs returning to that testing procedure.

“We will, as a matter of course, need to test all of our players this week and when they report. We’re conscious that with this virus, you know some of those tests, the results can be delayed. That’s happened previously.

“So we’ve got to be very well organised in terms of how we’re prepared for our camp, which we are.

“Our head of medical Charlotte Cowie was involved in that Project Restart group in the Premier League. She’s fully across all of the requirements.

“We’ve got an extra responsibility because we’re bringing players from different clubs, and we’ve got to make our environment as secure as we can.

“So, as a matter of course, everybody – staff, players – will be tested when they arrive and because of the UEFA requirements and the requirements of the countries we visit, they’ll probably be tested probably four or five times during the course of the week.”