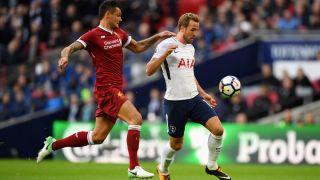 Croatia defender Dejan Lovren is eager to prove a point when he comes up against England forward Harry Kane in the World Cup semi-finals.

Lovren and Kane are set to meet again in Moscow on Wednesday, less than nine months after the former was substituted in the first half as Liverpool were crushed by Tottenham at Wembley in the Premier League.

Kane, who tops the Golden Boot standings in Russia, had already scored and assisted as Spurs recorded a 4-1 victory in October.

But Lovren said he enjoyed taking on the world's best as he looks to showcase his talent on a huge stage.

"He's one of the best strikers in the Premier League," the defender told UK newspapers.

"He deserves every credit he gets. In the last few seasons he's always scored more than 25 goals and he's one of the best strikers in the world.

"But I like to challenge these strikers and to show to everyone that I'm one of the best defenders."

Croatia have needed penalty shoot-outs to overcome Denmark and Russia in the knockout stage.

Lovren, whose nation are into the semi-finals for the first time since 1998, said Croatia could play with freedom.

"England are one of the favourites to win the World Cup and you have to respect that," he said.

"But we enjoy to play against big teams, as we showed against Argentina, and have nothing to lose."