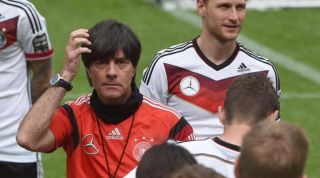 Low's men have been placed alongside Portugal, Ghana and the United States in Group G and are one of the favourites to triumph at the World Cup.

They have experienced a mixed lead up, with draws against Poland and Cameroon, and a win over Armenia completing their preparations.

Germany's hopes were also dealt a blow following the news that Marco Reus would miss the entire tournament due to an ankle injury sustained during Friday's 6-1 victory against Armenia.

But Low, who was recently called to quit his post by former Germany international Michael Ballack, is relishing the opportunity to test himself against the best in Brazil.

"The closer we get to a tournament the calmer I become because I know that we've thought of everything, and I have faith in that," Low told FIFA.com.

"I'm now able to deal with high-pressure situations very well and I even enjoy them actually. I'm looking forward to our warm-up games, to every training session and to everything Brazil has in store for us.

"Experiencing a World Cup in the world's most football-crazy country is as good as it gets, for the players, coaches and fans."

Low added: "We're going to a World Cup in a country that defines itself through football more than any other nation.

"Accordingly, the levels of enthusiasm are huge - I experienced that last year at the Confederations Cup. Football has a kind of primeval power in Brazil. That was overwhelming at the competition last year and will be even stronger at the World Cup.

"I'm really looking forward to seeing the best players in the world compete at such close quarters and I'm expecting to see football taken to a new level in Brazil.

"The game constantly evolves, as do players and teams. A World Cup brings the best together and testing yourself against the best is hugely satisfying."

Germany kick-off their World Cup campaign against Portugal on June 16.