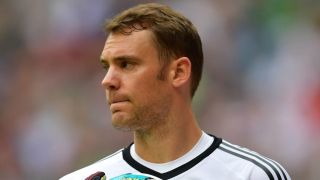 Germany head coach Joachim Low it optimistic captain Manuel Neuer will be ready to play in the World Cup.

Low named the 32-year-old in his provisional World Cup squad earlier this month, with the caveat that he must gain match practice before the group is cut to a final 23 for the tournament in Russia.

Neuer was an unused substituted as Bayern went down to Eintracht Frankfurt in last Saturday's DFB-Pokal final, meaning only friendlies against Austria and Saudi Arabia remain either side of Low's June 4 squad deadline.

Nevertheless, the coach is confident a player who had a key role in Germany's World Cup success in Brazil four years ago is on track.

"I'm optimistic and I assume that Manuel Neuer is able to make it," he told Bild after Neuer was given squad number one in Germany's party earlier this week.

"He has now been back in Bayern's training for more than two weeks and has reached the maximum load of physical demand. I think he can maintain this load in our training camp.

"Only Manuel himself can evaluate in the end if he still has subconscious fears. He promised us that we'll talk about that honestly. He is aware of his responsibility for himself and the team as well."

Despite this confidence, Low reiterated that the onus remains on Neuer to prove his fitness.

"Manuel goes to the World Cup as a player who is a 100 per cent ready to play - otherwise he won't," he added.

"It won't be that he only goes with us as a captain who just sits on the bench."

Germany have been drawn in Group F alongside South Korea, Mexico and Sweden.