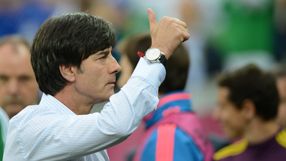 It all turned out well in the end, though, as Germany roared into the semis with a 4-2 victory that set up a clash with Italy or England in Warsaw.

"I tried to go and get an espresso but then we missed another chance and I got angry," said the 52-year-old renowned for his love of coffee.

With Greece holding on at 0-0 one horrible Marco Reus slice wide was greeted with a roar of disapproval and manic gesticulations by Low who had gambled on a much-changed line-up for the match on a damp and cool night in Gdansk.

Low had replaced the tournament's joint leading scorer Mario Gomez with Miroslav Klose and left out Thomas Muller and Lukas Podolski in a bid to confuse the dour Greeks.

It was a brave decision but despite taking 39 minutes to make the breakthrough, courtesy of Philipp Lahm's swerving shot, it ultimately proved a good one.

"After three matches and three victories it was hard not to be satisfied," Loew, whose side were congratulated by German Chancellor Angela Merkel, told reporters when asked about his surprise team selection.

"But I thought we had to unpredictable. I knew they would be ready for us because they know our players well. I thought I would freshen things up.

"In the end it worked out very well. Our three attackers were great and Klose scored and Reus scored."

Greece equalised on the counter-attack through Giorgos Samaras early in the second half but three goals in 13 minutes by Sami Khedira, Klose and Reus underlined Germany's superiority.

Despite conceding a late penalty after Jerome Boateng hand-balled, Low could hardly disguise his pleasure at the form of his side who have won four out of four matches at the tournament and are on a 15-match winning streak in competitive matches, a national record.

"I'm very proud of the players. There is no question we deserved to win the match. The only thing that worried me was that we were missing so many chances.

"But even after they scored we didn't get hassled. We were much better than the Greeks and we asked too much of them."