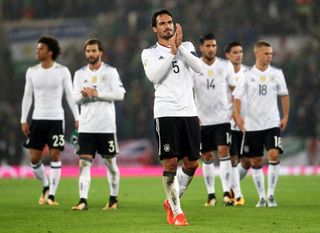 Here, the PA news agency gives you the lowdown on their opponents at Windsor Park.

There will be some younger fans in the stands on Monday night who cannot remember a time when Joachim Low was not the Germany coach. He took the reigns in 2006 after spending two years as an assistant to Jurgen Klinsmann, and has ridden out highs and lows since. Low guided Germany to runners-up spot at Euro 2008 and third place at the 2010 World Cup before his greatest success came in lifting the trophy four years later in Brazil. The credit he had built up with the federation was shown when they responded to a dismal 2018 World Cup – in which Germany suffered their first group stage exit – by keeping him in his post, having handed him a contract extension on the eve of the tournament.

Members of the 2014 World Cup-winning squad are increasingly short on the ground these days but one of the best of them still bosses the midfield. Real Madrid midfielder Toni Kroos has it all – vision, creativity, passing and the ability to take outstanding set-pieces – and a list of honours with club and country to reflect it. Kroos is closing in on 100 caps and, at the age of 29, should have plenty left in the tank yet.

Germany need little introduction on the world stage as four-time winners of the World Cup, three-time European champions and the 2017 Confederations Cup winners. The disappointment of the last World Cup saw their FIFA ranking slip as low as 15th but, as Low oversees a renewal of their squad with younger players, memories of that are already fading, and they remain one of the most feared sides in international football.

Germany began their Euro 2020 qualifying campaign strongly and passed the single biggest test when they won 3-2 away to Holland in the opening game thanks to Nico Schulz’s last-minute goal. Further victories over Belarus and Estonia – the latter an 8-0 rout in Mainz – were made to look entirely routine. But the first bump in the road came on Friday night when Low’s side surrendered an early lead to lose 4-2 at home to the Dutch, who scored all of their goals in the second half. It was a worrying defensive collapse which will have given Low plenty to ponder.

Northern Ireland have faced Germany 10 times since 1992 but have never won. The first three of those encounters all ended in a 1-1 draws, and it has been all Germany ever since. Three of the games have come during the Michael O’Neill era. Mario Gomez’s 29th-minute goal was enough to give Germany a 1-0 win when they met at Euro 2016. When they were paired together during the 2018 World Cup qualifiers, Germany won 2-0 in Hanover and 3-1 at Windsor Park.