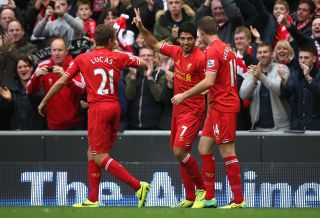 The Uruguay international was the subject of two failed bids from Arsenal and was said to be eager to depart Anfield in order to play for a club in the UEFA Champions League.

However, Liverpool boss Brendan Rodgers stood firm and refused to countenance the sale of his star man.

And after seeing Suarez score six goals in four Premier League appearances so far this season - including a hat-trick in Saturday's 4-1 victory over West Brom - Lucas feels the club's actions have been vindicated.

"It shows why the club fought so hard to keep him in the summer," the Brazilian said.

"What he did last year for us and what he is doing already just shows that is why the club wanted to keep him.

"Liverpool want to keep their best players and he was the best player last year - and probably the Premier League's best player.

"We are happy he stayed with us and he is just showing every week how committed he is.

"It doesn't matter what was going on in the summer, his mind now is just to help the team, to achieve great things and hopefully it will finish in a positive way in May.

"No one gets goals and great performances if you don't work hard and of course he is a special talent so he it makes it easier for him."