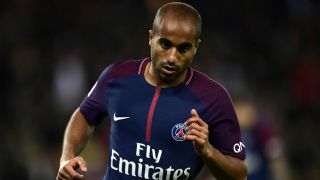 Paris Saint-Germain boss Unai Emery says he has encouraged Lucas Moura to look for another club in the January transfer window.

The Brazil international has been restricted to just five substitute appearances in Ligue 1 this season, having struggled to force his way back into Emery's plans following the arrivals of Neymar and Kylian Mbappe.

Lucas admitted this week that his lack of football has come as a "brutal blow", with Premier League clubs including Manchester United, Arsenal and Tottenham said to be monitoring his situation.

Emery has now confirmed the club will listen to offers for the 25-year-old this month.

"I told Lucas what I thought, with all due respect to him. He no longer has the opportunity to have playing time in Paris and he will have more elsewhere," he told a news conference on Tuesday.

Emery said he was unclear on the future of midfielder Lassana Diarra, who has been linked with a free transfer to the Ligue 1 leaders after leaving Al Jazira.

"I talked to [sporting director] Antero Henrique and he didn't talk about it, only players who are still here," he said.

PSG take on Guingamp in the Coupe de France on Wednesday looking to recover quickly from their 2-1 league defeat at the hands of Lyon.

Full-back Dani Alves was sent off in that game after arguing with the referee and Emery wants the experienced Brazilian to show more restraint in such situations in future, although he feels a red card was harsh.

"I want players with heart, who play with their head," he said. "If you play without one or the other, it's not good. You have to find the right balance, with the whole group.

"Dani's a smart player, he has experience, he plays with his heart. He needs to be balanced in situations like that.

"We know the player, we know he has character. Another referee might have shown a yellow card."