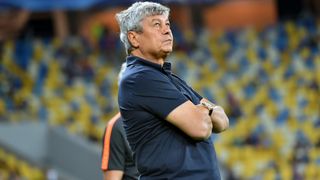 Shakhtar Donetsk qualified for the UEFA Champions League group stage but coach Mircea Lucescu was less than impressed with his team's performance on Tuesday.

Lucescu and Co. played out a nervy 2-2 draw at home to Rapid Vienna, a result just enough to see the Ukrainian champions win their play-off tie 3-2 on aggregate.

The two teams shared four first-half goals in Lviv but Oleksandr Gladkiy's 27th-minute equaliser proved decisive as Shakhtar advanced to the group stage for a sixth successive season at the expense of Vienna, who had Mario Sonnleitner sent off in the closing stages.

Despite the achievement, Lucescu lamented Shakhtar's inability to put the match to bed.

"We have progressed but I'm not satisfied with our performance, especially in the second half," Lucescu said afterwards.

"We had lots of opportunities but lacked the killer pass in the final third.

"To be honest, I don't think I have had so much luck in my entire career – they could have scored twice [in the last 10 minutes].

"I hope we will be more focused in the group stage."