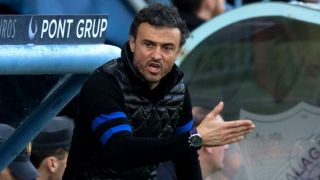 Luis Enrique's blasted Barcelona's first-half performance after they went top of La Liga with a 2-1 win at Malaga on Saturday.

Munir gave Barca the lead with a tap-in inside two minutes but the defending champions were pegged back half-an-hour later as Juanpi deservedly levelled for Malaga.

But the game was settled thanks to a moment of magic from Lionel Messi, who converted Adriano's left-wing cross in stunning fashion with an acrobatic volley in the 52nd minute.

Barca are now a point ahead of Atletico Madrid - who take on Sevilla on Sunday - but Luis Enrique was far from satisfied with his side's efforts.

"It is difficult to remember such a weak first half from us," Luis Enrique said. "In the second half, we competed better, but even then we made more mistakes than usual. The best thing was the team's spirit.

"It is easier to win when you play well, but we managed to get three points when playing badly.

"Javi Gracia's team always cause us problems. They are a very difficult opponent and we are very happy with the three points."

It is now three straight games without a win for Malaga, but Gracia was keen to take the positives from their battling display.

He said: "We are not happy to lose, never are, but the performance - like at Sevilla last week [in a 2-1 loss] - shows the way to continue.

"We have the consolation of knowing we did many things well. But a few mistakes we made meant we lost the game.

"We are playing well, but we need to get points so that good mood and confidence does not slip away."