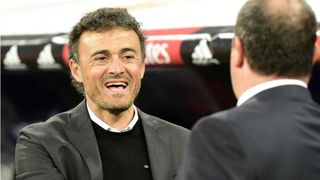 Luis Enrique was satisfied with Barcelona's performance as Espanyol were blown away 4-1 in the first leg of the Copa del Rey last-16 tie at Camp Nou.

Lionel Messi netted a brace and there were goals from Gerard Pique and Neymar, as the hosts came from behind to demolish their neighbours, who finished with nine men following the dismissals of Hernan Perez and Pape Diop.

Luis Enrique expressed his pleasure at Barca's display post-match, saying: "We have played well and we have achieved the objective we have for the game

"It's normal there is tension, it's a derby and we have our rivalry."

The Barca boss reserved special praise for Andreas Iniesta, whose pass set up Messi for the equaliser after Felipe Caicedo had fired Espanyol in front.

Enrique said: "Iniesta has unique peripheral vision. He is a magical player."

Although Barca hold a commanding advantage ahead of the second leg, Pique emphasised the need for his team to retain focus when they visit Cornella on January 13.

He said: "We have picked up a good result to get through but there is still the second leg to come

"The [red cards] have influenced the game. It has not resolved the tie but we go there with a good result. In a cup tie anything can happen."

Reflecting on the ferocious finish to the game, which featured a flurry of bookings as well as Espanyol’s two dismissals, Pique said it was to be expected.

"At the end of derbies there is much intensity. They have a way of playing," he said.