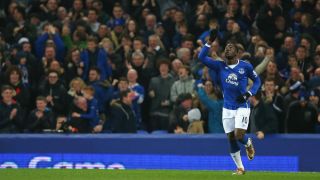 Everton manager Roberto Martinez said Romelu Lukaku wants to be the best striker in the world and backed him to top the scoring charts in the Premier League this season.

Lukaku has been in career-best form for Everton this season and sits atop the league scoring charts with 15 goals, alongside Leicester City forward Jamie Vardy.

Martinez praised the Belgium international and said he has backed up his promise back in August to be better than Manchester City's Sergio Aguero.

"I think that showed the focus he had then; obviously he has got that drive, he wants to become the best in the world," the Spanish coach explained.

"He wanted to improve in certain aspects of his play and he has done that. His back to play [with his back to goal] is a huge, huge improvement, the amount of goals, his work rate he has been very influential.

"He has proven since that August conversation that he was very much focused and meaning what he was saying."

Lukaku has 19 goals in all competitions, including 12 in his last 12 appearances, with Aguero sitting on 11 goals from 19 games this season.

Meanwhile, Martinez backed goalkeeper Tim Howard, but refused to confirm if the shot-stopper would be at the club next season.

"It is impossible to say that," Martinez said. "We need to take it game by game and week by week. I want Tim to feel stronger in every game.

"Watching him in training I don't see a sign of weakness or him being worn down or tired. It is the opposite. He is up for the challenge, up for helping the team and keeping up standards.

"I’m sure every experience will affect what you want to do in the summer."