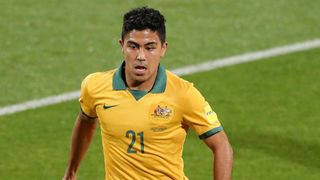 QPR and Australia midfielder Massimo Luongo has admitted he thought it was a joke when he was named on the leaked list of nominees for the Ballon d'Or.

The 23-year-old, who only moved to Loftus Road from League One's Swindon Town in May, described his inclusion alongside holder Cristiano Ronaldo and favourite Lionel Messi as "a bit random".

"I didn't even know if it was real … I thought it was someone trying to be funny," he said ahead of Australia's clash with Jordan this week.

"It's obviously a big honour, not many people get on it, I can say I've been on the Ballon d'Or list now. I don't know what to say about it … it's a bit random."

Luongo, who was the driving force behind the Socceroos' triumph at the Asian Cup in January and scored in the 2-1 final victory over South Korea, added: "The boys are taking the p*** a little bit, I do myself as well.

"If it was something like a big move or something, the media attention would play on my mind a little bit but this [doesn't affect me] maybe because I've got no chance of winning it."