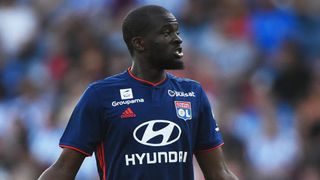 Lyon have announced Tanguy Ndombele has signed a one-year contract extension that will keep him at the club until 2023.

Ndombele, a reported transfer target for Tottenham, thrived in his first season at Lyon after joining from Amiens.

And after agreeing a new five-year deal with the Ligue 1 club, the France Under-21 international is targeting further improvement.

"I'm happy to stay one more season at Lyon," Ndombele told the club's official website. "That's the thing I wanted.

"I hope we're going to have a great season. It was important to me. I only had one season here, I wanted to stay to continue my progression.

"I want to do great things here. I have personal goals, but I prefer to keep them for myself. I had a good season because people were not expecting me to be at that level."