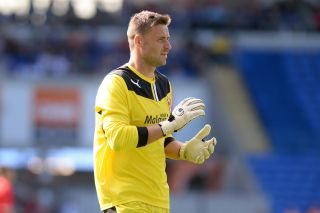 The 28-year-old has come under fire after Samuel Eto'o robbed him of possession in the penalty area as Marshall bounced the ball in preparation for a long punt downfield.

The Cameroon international duly played in Eden Hazard to score and cancel out Jordan Mutch's early effort as the incident proved a turning point as Chelsea ran out 4-1 victors.

A number of high-profile people have opted to wade into the debate - including former Manchester United defender Gary Neville, who labelled Marshall naive - but Mackay insists that he does not care what others think.

"What David Marshall did was within the laws of the game, it was a completely acceptable thing to do.

"It was the referee who got it wrong, Samuel Eto'o was in the wrong too and he should have been punished by an indirect free-kick being awarded to us.

"David Marshall should not be judged by anyone because he did not do anything wrong."

Cardiff head to Norwich City on Saturday, with Mackay braced for a difficult afternoon at Carrow Road.

"We'll be going there looking for a positive result, but we are aware how difficult a game it is going to be," he added.

"They have plenty of experience right through their side and for us it is another away game so we are under no illusions we are going to have to be at our very best to get anything."