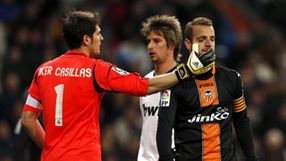 Valencia were furious with what they saw as several erroneous offside calls against captain Roberto Soldado at the Bernabeu, as well as a possible handball by defender Ricardo Carvalho in the penalty area and another by Gonzalo Higuain in the run-up to Real's second goal in their 2-0 victory.

They accused Real, who play the return leg at the Mestalla next week, of putting pressure on match officials in the days leading up to the game and pointed to comments by Angel Di Maria at a news conference on Monday.

The Argentina winger, who may be fined by the Spanish football federation (RFEF) for his remarks, said Real had suffered "bad decisions" from referees in recent weeks and even hinted that there was some sort of conspiracy against the club.

"There have been sending-offs, yellow cards and things that opponents could have got sent off for but didn't and then they send one of us off for the slightest thing," he said.

"These things happen but I think that sometimes they are mistakes that are not made by mistake."

Spain striker Soldado, a former Real player, said Real's tactics had obviously worked and the referee had "not been up to the task".

"We feel a lot of impotence," he said on Wednesday.

"It's outrageous because you see that they [the match officials] are scared to hurt the big team and that can't be allowed to happen," he added.

"In the end though it doesn't help you to complain because then you'll get punished on top of everything else."

Real have all but given up hope of retaining their La Liga title after slipping 18 points behind unbeaten leaders Barcelona and seven behind city rivals Atletico Madrid at the halfway stage of the season.

He will be available again for Sunday's game, while the club have also been boosted by the return this week of Brazil full-back Marcelo after a lengthy injury layoff.

Barca can open up a 21-point lead over Real, the only team to take points off them this term in October's 2-2 draw at the Nou Camp, and go 14 clear of Atletico, who host Levante on Sunday, with a win at Real Sociedad on Saturday.

With the team playing so well and almost out of sight of the chasing pack, the main threat to Tito Vilanova's side may be complacency.

Barca's World Player of the Year Lionel Messi, who has netted 28 goals in 19 league games this season, said the players were alert to the danger.

"We're very aware that there's a long way to go yet," he said in an interview published on FIFA.com this week.

"Our La Liga hopes are in our hands thanks to the lead we've got and the way we've gone about things, but we can't afford to relax," added the Argentine.