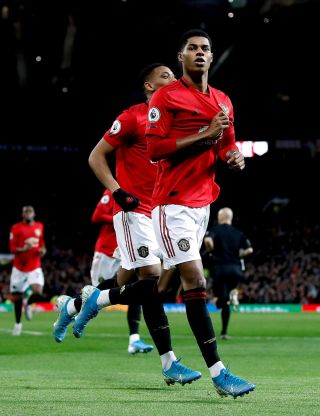 Harry Maguire hopes there is plenty more to come from Marcus Rashford and Manchester United this season.

Rashford struck twice on his 200th appearance for United in a 4-0 thrashing of Norwich in the Premier League on Saturday.

That took the 22-year-old’s goal tally for the season to 19 and team-mate Maguire feels he is only just getting going.

The England centre-back said: “He’s a top player with top quality. I can remember one of the first sessions when I went to train with England that he really stood out to me there – his ability on the ball, his technique.

“He has everything to go and have a career at the highest level. I’m pleased for him this year that he is starting to get the goals he deserves and hopefully he has not stopped yet and he has a few more in the tank from now until the end of the season.”

The win in a one-sided encounter brought welcome relief for United after a frustrating couple of weeks. They were beaten by Arsenal on New Year’s Day and comprehensively outplayed by Manchester City in the Carabao Cup last Tuesday.

Between those games came a dour goalless draw with Wolves in the FA Cup which has led to a replay this Wednesday.

United have been inconsistent throughout the season but, five points behind fourth-placed Chelsea, they still have hopes of securing Champions League qualification.

Maguire said: “The boys set a great intensity and there is no doubt we played really well. That is the tempo we need to play and we have set our standard now.

“We have to keep improving and keep working hard and hopefully the results will pick up.

“It was obviously a disappointing night here against City and we knew we needed to win, simple as that. We needed three points and we got the job done.”

Maguire missed the City clash with a hip injury but recovered quicker than expected to face Norwich.

The 26-year-old said: “I had a problem but it was only a small muscle and I normally recover quickly and can play with a bit of pain.

“I’m all right now and got through the game unscathed. Now I feel good and ready to go again.”