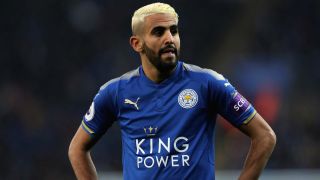 Riyad Mahrez is named on the bench for Leicester City's fixture at Manchester City, raising the possibility of him playing against the club he wanted to join on transfer deadline day.

The Algeria international has not featured in Leicester's last two matches after a move to the Etihad Stadium failed to materialise in January, despite the player handing in a transfer request.

Mahrez returned to training with his team-mates on Friday after 10 days away from the club, and manager Claude Puel has opted to select the 26-year-old as a substitute for Saturday's Premier League game against the runaway leaders.

"It's important to have Mahrez in the squad to look forward and to move on. We're stronger with him," Puel said, according to Leicester City's official Twitter account.

"There's a good feeling in the team. Today we have an opportunity, against a team we have already played twice, to try something different."