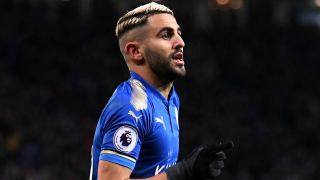 Riyad Mahrez has hit out at "completely untrue" reports claiming he went on strike after Leicester City blocked a deadline-day move to Manchester City.

The Algeria international won the PFA Players' Player of the Year award after leading the Foxes to a shock Premier League title triumph in 2015-16.

But Mahrez has been open about his desire to move on from the club, putting in a public transfer request at the end of last season.

A transfer for Mahrez failed to materialise, although he was linked with Roma, and he subsequently started the new campaign with Leicester.

Riyad Mahrez has today returned to training with the squad: February 9, 2018

Premier League leaders City moved for Mahrez in the January transfer window but Leicester refused to sell their prized asset.

Mahrez has been unavailable for Leicester's last two Premier League matches, but the winger says he was not AWOL as had been widely reported.

"Leicester City were always aware of my whereabouts and had knowledge of my thinking either directly or via my advisors," Mahrez said in a statement reported by the Leicester Mercury.

"I have been a part of the Leicester City team that has achieved much success including promotion to the Premier League and being champions of the league.

"My goals have always been the same and I have always given my full 100 per cent when I play for the club the fans and my team-mates.

"Those goals remain the same today and in the future and when I am asked to be a part of the Leicester team, rest assured I will continue to give my all.

"Over the past ten days many people claiming to be my friend have spoken about me and things they know nothing about.

"Off the back of that many people and journalists have made assumptions without properly checking the story, so I would like to clarify that all those so-called assumptions of why I was absent are completely untrue.

"Myself nor my advisors have ever made any statements about that so all presumptions made are totally without foundation."

Mahrez has scored eight goals and contributed seven assists in the Premier League this season, with Leicester eighth in the table after taking one point from games against Everton and Swansea City in the winger's absence.