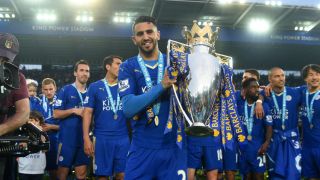 Three stars behind Leicester City's Premier League triumph have joined the likes of Lionel Messi and Cristiano Ronaldo on the shortlist for the FIFA Best Player award.

N'Golo Kante - now of Chelsea - has been nominated along with Riyad Mahrez and Jamie Vardy for the prize, which is given to the player deemed the best in the world in 2016.

Sergio Ramos is the only defender on the list, as Atletico Madrid's Diego Godin - who was nominated for the Ballon d'Or - misses out, along with Pepe, who won both the Champions League and Euro 2016.

The list was decided by a FIFA panel of experts known as the FIFA Football Committee, with the winner to be decided by a vote split between national team captains and players, selected media representatives, and a global fan poll.