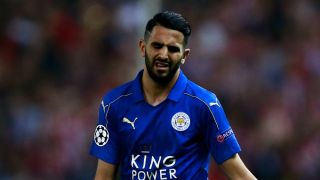 Leicester City manager Craig Shakespeare has no problem with Riyad Mahrez hinting he could pursue a move from the club in order to play in Europe.

Despite a remarkable upturn in form since Shakespeare replaced sacked Claudio Ranieri - Leicester won five straight Premier League games and reached the Champions League quarter-finals - they can finish no higher than eighth in the final table.

There will therefore be no European football at the King Power Stadium next season, but Shakespeare shrugged off reports that Algeria international Mahrez is considering his future at the club.

"It can be interpreted in different ways," Shakespeare told Sky Sports ahead of Thursday's league game at home to Tottenham. "I think there's nothing wrong with ambition, whether that be from a player, a manager or a coach.

"Him saying he wants to play in the Champions League - I think you'll remember I said after being knocked out by Atletico [Madrid], we want to experience this again. I don't see any problem with that.

"You have to talk to the players. But until you get an offer there's no need to have that conversation, other than to know they're okay, there are no issues, they feel wanted. But it's important you keep your best players at the club."

WATCH: boss Craig Shakespeare talks to the press ahead of Tottenham's visit to King power Stadium on Thursday night. May 17, 2017

Shakespeare's future is also undecided as his contract is due to expire at the end of the season, but he is in no rush to commence talks about a long-term agreement.

"We've got two games left, it will come to a conclusion," Shakespeare added. "I think the club know that it's important for forward planning that it gets sorted. So, my answer is we won't have to wait long."