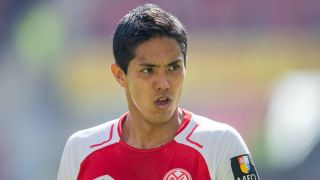 Yoshinori Muto will join Newcastle United from Mainz in a reported £9.5million deal pending approval of his application for a work permit.

The 26-year-old forward has agreed terms and undergone a medical with the Premier League club as Rafael Benitez seeks to sew up his fourth signing of the close-season.

But the completion of the move has been delayed until at least next week, when a hearing will be held to determine whether the Japan international is granted a work permit.

Muto featured once for his country at the World Cup in Russia, starting and playing 82 minutes in the 1-0 group stage loss to Poland.

He has won 25 caps in total for Japan.

Known for his pace and energy, the former FC Tokyo man boasts 20 goals from three Bundesliga seasons with Mainz.