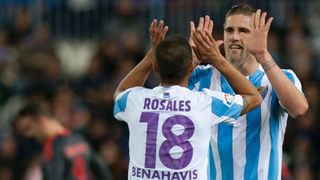 First-half goals from Charles and Raul Albentosa made it three La Liga wins in succession for resurgent Malaga as they beat 10-man Celta Vigo 2-0 on Saturday.

Charles had scored the decisive goal when Javi Gracia's men upset leaders Atletico Madrid 1-0 before Christmas to start their upturn in form and he headed his team in front with an eighth-minute opener in this one.

Roberto Rosales hoisted the ball back into the area when Celta partially cleared a corner and goalkeeper Ruben Blanco – advancing off his line – could only tip Charles' effort high into the net.

Fabian Orellana shot narrowly wide as Celta sought an equaliser but another set-play undid them in the 26th minute, with on-loan Derby County defender Albentosa guiding home Juanpi's delivery from the right wing for a first goal in Malaga colours.

Daniel Wass fired Iago Aspas' lay-off against the crossbar four minutes before half-time but Celta's ambitions of salvaging anything from the contest dwindled in the 64th minute when Blanco received a straight red card for bringing down Nordin Amrabat.