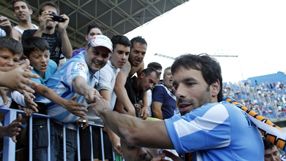 The big-spending Qatari-owned club knocked Valencia out of the last automatic Champions League qualification slot, climbing to 50 points from 31 games with seven left to play.

Faltering Valencia slipped down to fourth with 49 points after a 0-0 draw at leaders Real Madrid on Sunday.

Jose Mourinho's Real top the standings with 79 points but have had their lead cut back to four points by Barcelona, 4-1 winners at Real Zaragoza on Saturday.

Racing were reduced to 10 men after only three minutes at the Rosaleda when defender Francis brought down Salomon Rondon in the area to be shown a straight red card, but Cazorla's spot-kick was saved.

The hosts created a flurry of chances until Isco curled a superb shot inside the far post in the 22nd minute.

Spain midfielder Cazorla slotted away the second in the 64th from Enzo Maresca's slide-rule pass and substitute Van Nistelrooy headed the third from close range near the end.

Racing's 13th game without a win left them mired in relegation trouble in 19th place with 25 points, the same as basement side Sporting Gijon.

They are three behind Zaragoza and seven short of 17th-placed Villarreal and safety.