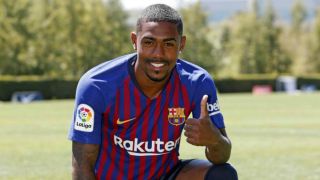 Malcom insisted he always wanted to sign for Barcelona after the Brazilian winger was set to join Roma.

Roma agreed a reported €40million fee with Bordeaux as the Serie A side closed in on the highly rated 21-year-old before Barca hijacked the deal.

With Malcom set to board a flight to Rome ahead of the transfer, LaLiga champions Barca made a last-ditch bid which was accepted by the French team and the in-demand star ended up at Camp Nou.

Speaking after he was presented by Barca in Portland on Thursday, Malcom said: "I always wanted to go to Barcelona.

"I was always calm. My agents have been in charge of this whole issue.

"It was an opportunity to play for Barcelona and here I will play with the best players in the world. I am very happy to be able to be at a team like this.

"It's very difficult to come to Barcelona, but I am going to give all I have to do a good job. I am very happy in my heart, I am realising a dream that I have had since childhood."

"We saw that he had the Barcelona profile," Barca sporting director Eric Abidal said.

"He is a left-footed player who can play on both wings, while he can also play as an attacking midfielder. He has a big future ahead of him."