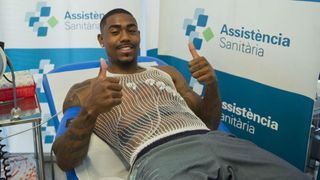 Malcom is set to join up with his new Barcelona team-mates on their United States tour after successfully passing his medical on Wednesday.

The Brazilian winger put pen to paper on a five-year contract on Tuesday after Barca agreed a €41million deal with Bordeaux, hijacking Roma's proposed switch for the 21-year-old.

Bordeaux announced earlier this week that a €40m fee had been agreed with Roma, only for Malcom to reportedly reject that move in favour of joining the Spanish champions.

Malcom could feature when Barca meet Tottenham in the International Champions Cup in California on Saturday, before potentially facing the club he snubbed, Roma, on Tuesday.

Barca conclude their ICC fixtures against AC Milan on August 4.