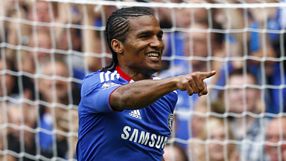 Chelsea's Florent Malouda has made a surprise recovery from a twisted ankle and is available for the match against Liverpool on Sunday having sat out Wednesday's Champions League game against Spartak Moscow.

The French winger will battle with Salomon Kalou, two away from 50 goals for Chelsea, for a starting spot. Midfielder Michael Essien should recover from a toe problem to play.

Chelsea's Yossi Benayoun and Liverpool's Joe Cole, who both switched clubs in the close season, are unavailable for the fixture having been ruled out by injuries.

Chelsea take the league's best away record - 10 points from 15 - to Liverpool hoping to maintain their five-point lead at the top over Arsenal and Manchester United.

Arsenal captain Cesc Fabregas and fellow midfielders Andrei Arshavin, Alex Song and Denilson all return from injury to the squad for Sunday's match at home to Newcastle United.

Arsenal manager Arsene Wenger was also delighted to see Robin van Persie back in training after nine weeks out with an ankle injury while defender Thomas Vermaelen is also nearing fitness, the club said on its website.

Boosted by an impressive win over Manchester City last weekend, Wolverhampton Wanderers turn their attention to Manchester United on Saturday and a second trip to Old Trafford in 12 days having lost 3-2 in the League Cup.

Third-placed United will be without Nani, who picked up a groin injury in Tuesday's 3-0 Champions League win at Bursaspor. Midfielders Darren Fletcher and Ryan Giggs could be fit to play.

The Dutchman has been impressive since joining from Real Madrid but is struggling with a hamstring injury, as is winger Aaron Lennon. Defender Ledley King is out with a groin problem.

The pressure is on for 19-year-old Nathan Delfouneso to get among the goals for Aston Villa at Fulham on Saturday after injuries ruled out John Carew and Emile Heskey.

Norwegian striker Carew has a calf problem while former England forward Heskey was ruled out for a month with a knee injury. Fellow striker Gabriel Agbonlahor is still unfit.

Everton manager David Moyes will not consider starting highly-rated midfielder Jack Rodwell, who is recovering from an ankle injury, at Blackpool on Saturday.

Moyes will also be without Leon Osman for six weeks after the midfielder had ankle surgery this week, the club said on their website.