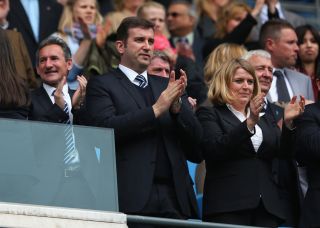 A takeover of Heart by City, with a minority stake purchased by the owners of NRL franchise Melbourne Storm, was announced on Wednesday in a stunning coup for the struggling A-League side.

The acquisition of Heart is the next stage in a process of global expansion by City, which also operates New York City FC, a club set to make its Major League Soccer debut in 2015.

And while Heart can expect to benefit from the wealth of City owner Mansour bin Zayed Al Nahyan, Soriano insisted the club will be more than a regional outpost of the European powerhouse.

"We know that Melbourne is the sports capital of Australia, where there is a lot of people that love football," he told Fox Sports.

"And the Heart is a club with a lot of potential.

"The reality is that we are here to help develop and strengthen a club in Melbourne. And we will do whatever is needed to have a club here that is rooted in Melbourne and is successful.

"This club is going to have an advantage, which is to use the global resources of City. That's it. Our aspiration is that fans in Australia, in Melbourne, that like football and good football, are going to like our club in Melbourne.

"This is not going to be a small Manchester City."

According to statements released by Heart and City, the A-League side's existing playing and coaching staff will remain in place for now, with no announcements on changes to be made until later in 2014.

"I can say that it helps that he comes from a country that loves football," he said.

"They play also a wonderful football. Don't forget that in Barcelona where I started in '88 was with Johan Cruyff (as coach).

"And in 2003 we signed a Dutch manager, it was (Frank) Rijkaard. It helps that he (van 't Schip)'s coming from Holland because they love the football that we also love."

Begiristain flagged the creation of a youth academy to help implement a distinct playing style throughout all age groups.

"We need to start improving the first team," he said.

"No. We've never done that," he said when asked if City would cherry pick Heart's best youngsters at will.

"We don't intend on doing that. I think we, over the last five years certainly, that I've been at the football club, whatever players we've brought in, we've done it in the right and proper way.

"We have a moral and ethical way of doing things and we're not prepared to compromise on that."