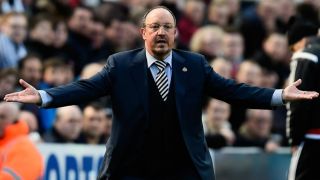 Manuel Pellegrini – a former Madrid boss like Benitez – and his side will be seven days away from the first leg of their Champions League semi-final tie when they take to the field against Newcastle.

City are third in the table following their convincing 3-0 win over Chelsea on Saturday, but the hosts will also be in confident mood after beating Swansea City by the same scoreline, moving them to within three points of safety with five matches remaining.

Benitez hopes City will have one eye on the Champions League and suggested that Newcastle can beat any team on their day.

"In the back of your head you are thinking about a semi-final or final and if you are going to get an injury," the 56-year-old said of City ahead of the match.

"They are professionals and will try to win but in the back of their mind they won't want to miss a game through injury. I think they have an eye on the Champions League and hopefully we can take advantage.

"If we believe from the first minute until the last one then we can beat anyone on our day. The way we won with passion, intensity and character against Swansea is credit to our fans and players. We have to show it every game now.

"You can't be just worried about Sergio Augero or Kevin De Bruyne – Man City are a team who are doing so well in Champions League and have many good players. They played very well against Chelsea.

"We have to be ready for a difficult game. We all have to stick together, work hard and try to get three points. We have nothing to lose at the moment and we have confidence."

Benitez - who is yet to decide on his team selection for the game - also confirmed that injured defensive duo Fabricio Coloccini and Daryl Janmaat are still out.

Moussa Sissoko stepped in as captain in the absence of Coloccini and the ex-Liverpool boss had positive words for the France international.

"I don't know if Sissoko will continue as captain," added Benitez. "I have to decide, but I'm really pleased for Moussa - he's good for the team.

"I chose Sissoko as captain because of how he behaves in training every day. He works hard, helps me with French players. We have a lot of players who talk French and he has a big influence with them.

"They see him as a big name. So, if he's performing well, they will follow him."