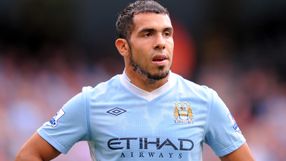 Mancini told reporters that the Argentine had ignored his instruction to warm up early in the second half of Tuesday's 2-0 defeat and that Tevez was "finished" while he was manager.

Tevez, who has found controversy follow him from club to club, denied refusing to play and the Premier League outfit are now trying to get to the bottom of what happened.

"Tevez has been suspended until further notice for a maximum period of two weeks," the club said in a statement on their website.

"The player's suspension is pending a full review into his alleged conduct during Tuesday evening's 2-0 defeat to Bayern Munich.

"The player will not be considered for selection or take part in training whilst the review is underway."

Tevez, who is ruled out of Saturday's league trip to Blackburn Rovers before the two-week international break, earlier sought to placate City fans whom he has already angered over the past year with his open desire to leave the club.

"There was some confusion on the bench and I believe my position may have been misunderstood," he said in a statement, according to local media.

"I would like to apologise to all Manchester City fans, with whom I have always had a strong relationship, for any misunderstanding that occurred in Munich.

"They understand that when I am on the pitch I have always given my best for the club. In Munich on Tuesday, I had warmed up and was ready to play.

"This is not the right time to get into specific details as to why this did not happen. But I wish to state that I never refused to play. Going forward, I am ready to play when required and to fulfil my obligations."

If Mancini sticks to his guns, Tevez's words will fall on deaf ears at a club whose patience he has tested several times.

Last December he put in a transfer request that the club turned down, while he lodged another at the end of last season citing family reasons.

He made scathing comments about Manchester on an Argentine chat show in June, saying the city "has nothing" and is "very expensive" and that he was "never going back to Manchester, not even on holiday."

He nevertheless returned after a planned return to Brazilian club Corinthians fell through but was stripped of the club captaincy and found himself relegated to the bench as compatriot Sergio Aguero was paired with Edin Dzeko up front.

It is a major fall from grace for the player who won City fans' hearts with his work-rate and goals after a controversial move across the city from Manchester United in 2009.

His arrival in the blue side of the North West English city created a storm when City posted a giant 'Welcome to Manchester' billboard following his defection.