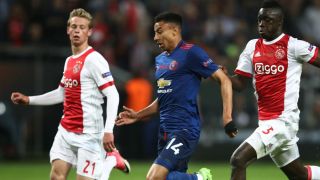 Jesse Lingard believes Manchester United are "capable of anything" and expects them to challenge for the Premier League title next season.

However, a sixth-placed top-flight finish underlined how far the club still has to go to recapture the glory days, although Lingard cited the 25-match unbeaten run in the league as evidence of their potential.

"It shows we're capable of anything," the England midfielder told the club's official website.

"If we'd managed to convert those draws at home into wins we'd have been up there with Chelsea and Tottenham, so it's all there for us, but it's just about doing it on matchday.

"I think finishing inside the top four and winning the league was our ambition at the start of the season. We know we've got the players capable of winning the league but it didn't happen – we've had to play through the Europa League to get to the Champions League.

"There have been a lot of positives this season; the manager has got us well drilled and if we take that into next season with more goals and turning draws into wins, I don't see why we can't be challenging for the title."

United finished 24 points behind champions Chelsea, with a league-high 15 draws.