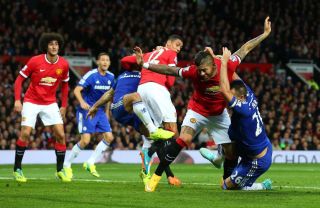 But they have struggled defensively - conceding 13 goals in nine league fixtures this season - highlighted by a stunning 5-3 capitulation at Leicester City last month.

With a mouth-watering Manchester derby set for Sunday, Cole - a five-time Premier League winner at Old Trafford - believes United can return to the top if they fix their defensive issues.

"A lot of the players are attack-minded - want to score goals.

"I think at times we've conceded some silly goals, but I think if you patch up all those problems, Man United will be a force."

Sunday's trip to the defending champions provides Van Gaal's men with another stern test after a seemingly favourable opening to their 2014-15 campaign.

But United, who are four points adrift of City after Manuel Pellegrini's men lost at West Ham, will be boosted by the return of captain Rooney following a three-game suspension.

"He's a quality player, he's the captain of the team now," said Cole.

"When you're missing a player of his quality through suspension, you're going to miss him.

"So hopefully he'll slot back in and give Man United a big boost."