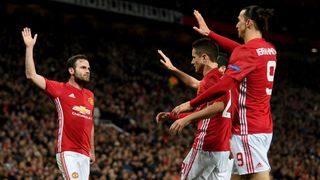 Match-winner Juan Mata said Manchester United will be doing everything they can to win the Europa League this season in an attempt to qualify for the Champions League again following the defeat of Rostov.

United – who drew 1-1 draw in Russia in the first leg – were superior for much of Thursday's match at Old Trafford, hitting the post twice in the first half through Zlatan Ibrahimovic.

They had to wait until the 70th minute before making things a little more comfortable, though, as Mata finished off a well-worked counter-attack.

And the Spaniard is eager for United to go all the way and make sure of qualification for Europe's elite competition, with a top-four finish in the Premier League looking tougher by the week.

"That's our aim," Mata told BT Sport. "We always want to win every tournament that we are in.

"Obviously it's a good chance to play in the Champions League next season, but there are still some very good games left in the Europa League.

"The level is very good. But we want to play Champions League next season and this is a way to do that."

It took United longer than expected to break the deadlock on home soil and, while Mata was happy with the football they played in the first half, he accepted that their finishing should have been better.

"Well, it was a matter of finishing our chances," he said. "In the first half we played great football, but couldn't finish.

"You have need to score otherwise difficult to go through. That's why it was also important that we kept their score to 0 – Sergio [Romero] did really well with that."

Ander Herrera was similarly frustrated with United's lack of composure in front of goal, even going on to acknowledge that their inability to finish teams off is becoming a bad habit.

Ander Herrera says he and his team-mates are delighted to reach the quarter-finals... March 16, 2017

"These kind of games can look easy, but they are not easy," the midfielder added. "Rostov had nothing to lose and came here to go through and I think we controlled it really well, creating lots of chances.

"But it is the same problem we've had all season. We are creating chances but always the keeper, or the post [save the other team] and we don't close games, so in second half we have to suffer a little.

"But we controlled the game and some points we played really, really well."