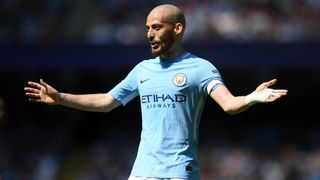 Manchester City were held to a 0-0 draw by Huddersfield Town on Sunday that slightly dampened their Premier League title celebrations.

Pep Guardiola's runaway leaders were well short of their best as they failed to break down a resilient Huddersfield side, who move three points clear of the relegation zone.

A packed crowd at the Etihad Stadium saluted the title-winners with a flag display before kick-off, with their team at last able to celebrate with the trophy after the final whistle.

The action on the pitch did not quite match up to the carnival atmosphere, though, with City managing only two shots on target in the match, and none in the second half.

Indeed, Huddersfield arguably had the better chances in the first 45 minutes, particularly when Florent Hadergjonaj shot straight at Ederson from inside the penalty area.

The result means City are still two goals, two points and one victory short of Premier League records, with games to come against Brighton and Hove Albion and Southampton, but it could prove a crucial point for Huddersfield as they prepare to face Chelsea and Arsenal.

David Silva, who led his team out to a Huddersfield guard of honour before kick-off, forced a good low save from Jonas Lossl as City started on the front foot.

Ederson was soon busy in the home goal, though, keeping out Aaron Mooy's bouncing effort before denying Hadergjonaj after a clever free-kick.

Alex Pritchard and Chris Lowe each had chances with fierce strikes, too, as City struggled to find rhythm in a first half played out to the sounds of a faulty stadium fire alarm, with a couple of Kevin De Bruyne efforts the closest they came to a goal before the break.

Lossl almost dropped the ball on the goal line as City stepped up their attacks after the restart, but David Wagner's well-drilled defence largely restricted the home side to hopeful crosses into the box.

Guardiola introduced Benjamin Mendy, Ilkay Gundogan and Bernardo Silva from the bench, yet their 79 per cent possession tally continued to yield little by way of opportunities, and Scott Malone stung the palms of Ederson after racing into space on the break in injury time.

The draw does see them move 17 points clear of second-place Manchester United, though, and keeps them on course to break the 100-point barrier if they win their final two matches.