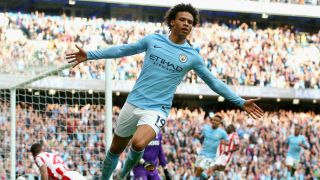 Manchester City moved two points clear at the top of the Premier League with a 7-2 thrashing of Stoke City at the Etihad Stadium on Saturday.

Manchester United's 0-0 draw with Liverpool had temporarily lifted them to the summit but City took full advantage of their rivals' dropped points with a rampant display against a dismal Stoke side.

Gabriel Jesus, Raheem Sterling and David Silva had them 3-0 up in less than half an hour as a ragged visiting defence made life easy for Pep Guardiola's front three.

Stoke did threaten a comeback either side of half-time, with Mame Diouf firing home before his header deflected in off Kyle Walker to make it 3-2, but hope of a shock result did not last long.

Jesus scored his second and Leroy Sane his first from two exceptional passes from Kevin De Bruyne, making his 100th appearance for the club, either side of a stunning strike from Fernandinho.

Guardiola made some changes in the closing stages – although Sergio Aguero, back from a broken rib, stayed on the bench – as City looked to save some energy for next week's Champions League meeting with Napoli.

The substitutions did little to disrupt City's rhythm, though, as Bernardo Silva finished in the closing stages to seal a seventh win from eight games that opens up a gap at the top of the table.

Sane should have opened the scoring after seven minutes but instead blasted over the bar from point-blank range, but it did not take City long to strike.

With 17 minutes played, Kyle Walker was allowed time and space inside the penalty area just yards from Jack Butland's left-hand post, and his cut-back was turned in by Gabriel Jesus.

It was 2-0 barely 90 seconds later. De Bruyne's fine throughball found Sane, who had been played onside by Erik Pieters, and he unselfishly laid the ball off to Sterling to tap home.

Stoke had scarcely managed any spell of possession before City bagged a third, with David Silva controlling Sterling's cut-back before prodding past Butland from six yards.

It looked all-too easy for the home side but Stoke at least snatched a lifeline before the break. Xherdan Shaqiri released Jese Rodriguez down the right and he combined well with Diouf, who drilled a shot in off Fabian Delph's extended leg and beyond Ederson.

Matters become more uncomfortable for the home side less than three minutes after the restart, as Diouf's header from debutant Thomas Edwards' curling cross deflected off Walker and into the net, prompting jubilant celebrations in front of the away fans.

But City restored their two-goal advantage eight minutes later. Bruno Martins-Indi was caught dithering in possession and De Bruyne took full advantage, racing down the right before sending in a superb low cross to the unmarked Jesus, who fired high into the net.

Fernandinho then produced the best goal of the match, a thunderous strike from 25 yards out that went in off the crossbar, as Stoke's defence allowed the Brazilian all the time he needed to set himself and let fly.

Five minutes later and City had their sixth, De Bruyne's stunning pass picking out Sane's run into the left of the area, the Germany star side-footing beyond Butland at the near post.

There was time enough for Bernardo Silva to score his first Premier League goal, gathering in Sterling's pass after Stoke failed to clear before poking a finish into the bottom-right corner, capping another devastating display from City that has given them a boost in the title race.