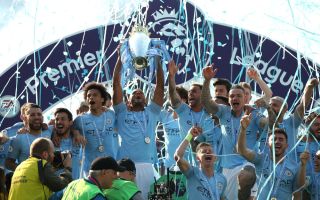 Manchester City overcame an early fright to roar past Brighton and wrap up the Premier League title.

Pep Guardiola’s side recovered from going behind to a Glenn Murray header to run out 4-1 winners and pip Liverpool to the crown.

Any title jitters were eased within 83 seconds of Murray’s 27th-minute opener as Sergio Aguero, scorer of the dramatic clincher in 2012, reprised that famous strike with an instant equaliser.

Further goals from Aymeric Laporte, Riyad Mahrez and Ilkay Gundogan then started the party in the away end as Liverpool were forced to settle for a valiant second.

It was a remarkable title race which lasted until the final day, yet was oddly bereft of twists and turns as City and Liverpool relentlessly racked up win after win after win.

As it turned out Liverpool won their last nine but City’s 14-match winning streak, a record end to a top-flight season, ensured the Reds’ wait for the title will tick into a 30th year.

Over nine months and 38 games each, the two juggernauts clocked up 195 points between them as they disappeared over the horizon.

Liverpool’s final total of 97 would have seen them take the title at a canter in every other Premier League season, barring the last. Yet they still could not catch this incredible City side.

The football gods have had a busy week, and they took Sunday off. Liverpool, it seems, had used up their quota of miracles against Barcelona in the Champions League semi-finals.

Brighton, safe from relegation as of last week but in dismal form, always looked like being compliant opponents for City.

Yet an early snap-shot from Alireza Jahanbakhsh, which fizzed narrowly wide, had Guardiola down on his haunches, as if the Spaniard sensed all was not entirely as it should be.

Word then arrived, via Brighton’s fans, that Liverpool were ahead against Wolves at Anfield when Murray stunned the visitors, heading in at the near post from a Pascal Gross corner.

The lead lasted less than a minute and a half, though. David Silva slipped the ball through to Aguero, who was being played onside by Lewis Dunk.

The Argentinian duly obliged with his 32nd goal of the season in all competitions, blasting the ball through the legs of Maty Ryan.

At this stage Liverpool still sat on top of the ‘as it stands’ table, but not for long.

After Brighton keeper Ryan saved from Mahrez at his near post, Murray left Laporte all alone at the corner to nod home.

The jeopardy, all 10 or so minutes of it, was fun while it lasted. Yet all the time there was one goal in it Brighton had a puncher’s chance, and Liverpool still had some hope.

That hope was extinguished when Mahrez, who was not having the best of games, popped up on the edge of the area, effortlessly slipped past the sliding Dunk and slammed the ball home.

Gundogan sent a brilliant free-kick nestling into the top corner to seal the deal in the 72nd minute.

It was ultimately a seaside stroll, and the routine coronation Liverpool feared.

But City’s triumph will be defined not by swatting aside Brighton, but by Vincent Kompany’s winner against Leicester, or Kyle Walker’s stunner against Newcastle, or inflicting Liverpool’s only league defeat of the season with the help of a gap on the goal-line of 1.12 centimetres.

In claiming the club’s sixth title, and a fourth in the last eight seasons, Guardiola’s side also became the first to retain the Premier League trophy since Manchester United 10 years ago.

A 32nd win of the season also equalled the top-flight record, set by City last season.

Now only Watford, in next weekend’s FA Cup final, stand in the way of an unprecedented domestic treble for this incredible side.