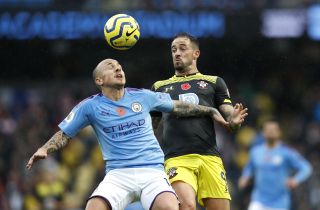 Manchester City defender Angelino has returned to RB Leipzig on a season-long loan.

Angelino spent the second half of last season on loan at Leipzig, who finished third in the Bundesliga and reached the Champions League semi-finals.

“Angelino will spend the 2020-21 season on loan at Red Bull Leipzig,” City said on their official website.

“He made a key contribution during his initial spell with the German side, making 18 appearances in all competitions.”

The 23-year-old full-back first joined City in 2014 and, after moving on to PSV Eindhoven in 2018, he returned to the Etihad Stadium in the summer of 2019 after a £5.3million buy-back clause was triggered.

Angelino made 12 first-team appearances for Pep Guardiola’s side last season before moving to Germany at the end of January.

He was linked with a move to Barcelona last month, while his initial loan deal with Leipzig is reported to have contained a £27million option to buy.