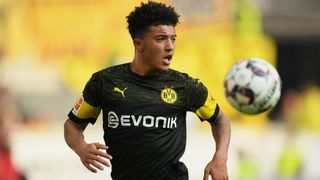 Sancho has enjoyed a rapid rise to prominence in the Bundesliga since joining Dortmund in August 2017, with his form this season earning him his first call-up to the senior England team.

City were unable to convince Sancho to sign a new lucrative contract and allowed him to depart in a reported £8million deal, with the winger then going on to make 12 Bundesliga appearances in his first campaign.

Although often used as a substitute this term, Sancho has already featured 11 times in the league and been instrumental – scoring four and setting up six goals – in Dortmund sensational start to the season, picking up the Bundesliga's Player of the Month award for October.

Reports began to circulate during the latest international break that the Premier League champions had a buy-back option on the 18-year-old, but Zorc has tempered the excitement of City fans, insisting that is not the case.

"Principally we don't make contract details public," Zorc said in a news conference. "But what you mean here is, actually, not really relevant, because it would be at most a matching right.

"That would have no significance at all for us, apart from having to talk with City if an offer came up. But that's very theoretical."

Sancho and Dortmund return to Bundesliga action following the international break on Saturday, as they travel to Mainz looking to extend their four-point lead at the top of the table.