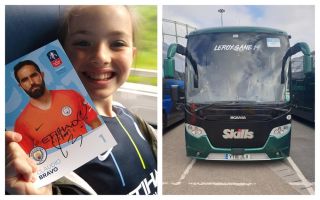 Manchester City’s players have been praised for a “fantastic gesture” after paying for more than 50 coaches for fans to travel to the FA Cup final.

Each coach contained the name of the player who paid for it, as well as a signed picture of them left on each seat.

The gesture meant lucky supporters who got a spot had to pay just 1p to get to the game with Watford at Wembley.

Fan Bob Brindle travelled to the match with his daughter Lucy on the bus paid for by goalkeeper Claudio Bravo.

As well as getting her signed Bravo picture, she also managed to swap with other supporters at service stations on the way, meaning she also got signed snaps of Sergio Aguero, Bernardo Silva and Danilo.

Fellow fan Peter Robinson was on the Leroy Sane coach, and said: “This has been a fantastic gesture by Leroy Sane and the rest of the Manchester City squad. I can’t thank them enough for this and for the season we’ve had.”

@LeroySane19 has got skills…… never a truer coach. Thanks Leroy. pic.twitter.com/dcqzvb3XYq— Peter Robinson (@poddyctid) May 18, 2019

City announced the move in April after beating Brighton to reach the final, and the chance of a history-making treble.

At the time captain Vincent Kompany said: “We still have so much to fight for this season, and this is our way of saying thank you to them for being with us every step of the way.”