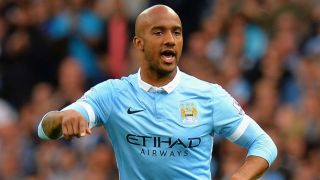 Fabian Delph wants Manchester City to get back on track in a "strange" Premier League title race when they host Crystal Palace on Saturday.

Manuel Pellegrini's team were frustrated on Wednesday in a goalless draw against Everton at the Etihad Stadium, where visiting goalkeeper Tim Howard excelled and City winger Raheem Sterling was denied what appeared to be a strong penalty claim under a challenge from John Stones in stoppage time.

Leaders Arsenal were held to a 3-3 draw by Liverpool at Anfield, while Leicester City beat Tottenham 1-0 to draw level on 43 points with the Gunners at the summit.

City lie three points further back in third place and England midfielder Delph says the frontrunners slipping up unexpectedly has become a common theme in 2015-16.

"It's been a strange season so far regarding the points the leading teams have got on the scoreboard," he told mcfc.co.uk.

"Every week teams around us seem to be dropping points at the same time we do so as long as it stays like that or we put the points on the board and they don't, it will eventually work in our favour."

Delph was an unused substitute against Everton, Pellegrini raising eyebrows by utilising only David Silva among his potential replacements as the clock ticked down and the stalemate ensued.

The manager later explained his decision was motivated by wanting to keep those in reserve fresh to feature in forthcoming matches, meaning Delph could perhaps return to the starting line-up against Palace.

"I hope to be involved as much as possible and I'm always ready to play when needed or called upon," said Delph.

"You'll get nothing less than 100 per cent from me and I'm certain the same goes for the other lads.

"It's important to have a good squad and we've got a great one, so rotation at this time of year probably makes more sense than using the same players week in, week out."

Palace have endured a drop-off from their impressive early season form, with a 1-0 loss to bottom side Aston Villa on Tuesday marking their fourth consecutive Premier League match without scoring.

A raft of injuries to forwards have not helped manager Alan Pardew to turn around this slump, with Yannick Bolasie (hip) and Dwight Gayle (hamstring) still sidelined.

Reflecting on the Villa defeat, Pardew said: "We looked short of energy and cohesion, and maybe the fact that our offensive players are all struggling to come back to full fitness was shown up.

"We've been getting away with it a little bit, but against Villa we didn't."

City were 1-0 winners when the teams met at Selhurst Park in September, youngster Kelechi Iheanacho coming off the bench to net a last-gasp winner, while Palace suffered a 5-1 defeat in Manchester to end their League Cup campaign in October.

Key Opta stats:
- Manchester City have won nine and lost one of their last 10 meetings with Crystal Palace.
- Yaya Toure has scored in four of his past five outings against Palace in all competitions.
- Crystal Palace striker Connor Wickham has three Premier League goals against Manchester City.
- Alan Pardew's side have failed to score in four successive top-flight matches for the first time since February 1998.
- Sergio Aguero has not scored in three appearances against Palace, despite netting versus 24 of 28 Premier League opponents faced. Leicester City, Burnley and Bolton Wanderers are the other sides to have shut out the Argentina striker.