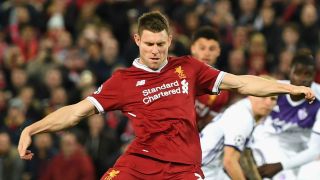 James Milner knows Liverpool's results against the Premier League's top sides have been disappointing this season but he predicted there may be tough times ahead for leaders Manchester City.

The Reds lost 5-0 at the Etihad Stadium in September before suffering a 4-1 defeat against Tottenham at White Hart Lane, while their games against Manchester United and Chelsea at Anfield both ended in draws.

Milner insisted Liverpool, who are fifth in the table and 14 points behind City, remain in the hunt for silverware.

"And this year we have had two disappointing results against teams challenging and maybe been a bit more ruthless against the lower teams.

"I think it is all there, we just need to put it all together. A lot can happen and we have probably had a sticky period, Spurs have had one and I am sure Man City will. And it is whether they can still get results in that time.

"There is a chasing pack at the moment which is pretty tight, everyone is close together and that is the quality of the Premier League."

Key to Liverpool's hopes of glory this season is the form of Mohamed Salah, who has scored 17 goals in 21 games across all competitions.

The Egyptian's star performances have led to comparisons with former Liverpool talisman Luis Suarez, but Milner backed the newcomer to carve out his own niche.

"He is a different player to Suarez and hopefully he can keep delivering and improving," Milner said of Salah. "Both top players, but Mo will want to be his own player.

"It is obviously nice being compared to top players, but ultimately he wants to play his own way.

"I am pleasantly surprised at how well he has done so quickly, I know what a good player he is," Milner added.

"So it is a big change for anyone to do that and for him to hit the ground running like he has and played as well as he has and scored the goals, that is credit to him."

The return of Sadio Mane after a hamstring injury has bolstered Liverpool's attack heading into December, and Milner said the Senegalese attacker will be an important source of goals.

"He was amazing last year and has done well again this year," said Milner. "He has had an injury and come back so fast and he is such a top player for us as well.