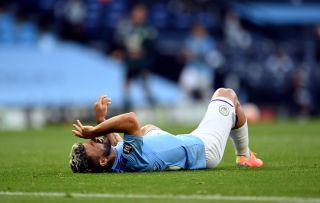 Sergio Aguero will not be involved as Manchester City face Lyon in the Champions League quarter-finals in Lisbon on Saturday.

City’s leading scorer has been out since undergoing knee surgery in June but had not been ruled out of the latter stages of the European tournament.

However, the striker is still not ready for action.

Guardiola on Aguero: He is still in Barcelona making his recovery #MCFCpic.twitter.com/ilVyuZ4t3B— Andy Hampson (@andyhampson) August 14, 2020

Otherwise Guardiola feels his side are ready for action.

Guardiola said: “Anything can happen, it is a knockout game, but we are ready. The pressure will be there, but it will be for all the other teams. We are prepared.”

The remaining matches in the tournament will all be played over one leg, which could suit City given their successes in domestic cup competitions in recent years.

Guardiola said: “It’s quite different. When you play first leg you have one eye on second leg.

“But when we play FA Cup or Carabao Cup we are used to it. There are no second chances – you are either in or out. The approach is very different.”

Guardiola said: “They are a tough team with a lot of good players. We have to be focused on ourselves, be prepared and fight until the end to try to win.”

Defender Aymeric Laporte is also looking forward to the challenge.